All He Knew, a novel-in-poems inspired by a true story, is set in the early 1940’s. The story follows Henry, deaf and thought by authorities to be “unteachable,” as he is separated from all he knows at home, including his beloved sister Molly. At age six, he is sent to live in a bleak institution where he and the other children find ways to help each other. When Victor, a WWII conscientious objector, arrives for alternative community service as an attendant in the institution, things begin to change. 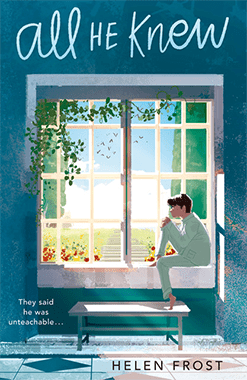 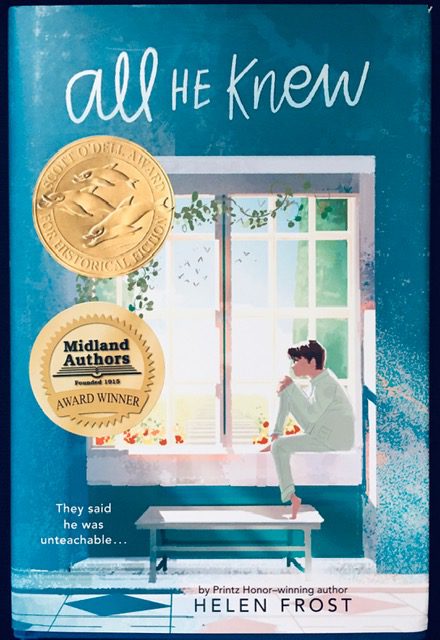 ALL HE KNEW is included on the National Council of Teachers of English list of Notable Verse Novels for 2021.

ALL HE KNEW is the winner of the 2021 Children’s Fiction Award, given by the Society of Midland Authors for the best book written by Midwest authors and published in 2020.

Gr 4-6– “From family history about a young Deaf boy who was institutionalized in 1939, Frost, poet and author of the award-winning Keesha’s House, has constructed a moving work of historical fiction written in free verse and sonnets. It bridges two worlds: The deaf community and conscientious objectors who, during World War II, numbered 12,000 men…This must-have is an instant classic of historical fiction, focusing on a Deaf boy institutionalized during World War II. Written in eloquent free verse and sonnets, it’s an excellent poetry-teaching tool as well.”–Georgia Christgau, LaGuardia Community Coll., Long Island City, NY

In this poignant free verse novel spanning 1933–1945, six-year-old Henry, who becomes deaf following a fever, arrives at the Riverview…The viewpoint shifts between Henry and his older sister Molly, who tells her brother’s story and describes family struggles to save enough to visit, and then widens to include a kind conscientious objector, 17-year-old Victor…Frost balances descriptions of institutional abuse with strong characters and enduring hope. Ages 10–14.

“Although Frost’s subject is weighty, she handles it with skilled sensitivity. All He Knew is a significant and poignant exploration of a difficult moment in American history and serves as a loving tribute to the young people whose experiences it brings to light.”

“Illness renders Henry deaf at a young age, and in 1939, when he’s six, authorities label him “unteachable” and his family is told to place him in the Riverview Home for the Feeble-Minded. As Henry makes his way in the abusive and neglectful institution, treasuring but then losing the occasional friend, he’s missed at home, especially by his older sister, Molly, who communicates with him by sending him pictures. The arrival of the war brings conscientious objectors to the institution staff, especially kind Victor, who realizes Henry is much smarter than he’s perceived to be and suggests to Henry’s family that a future outside of Riverview is not only possible but preferable. Frost’s smooth, burnished verse, ranging from free verse to sonnets, unfolds the story nimbly. While the historically based picture of the institution and its view of disability is appropriately horrifying, the book carefully avoids turning this into a stereotypical rescue drama; Henry is a keen perceiver capable of rebelling in well targeted ways (as with his fart attack on an intrusive staffer). It’s also clear that Henry’s cash- and option-strapped farm family is, as his father says, “the kind that doesn’t get to make the rules” when authority tells them what they should do. The result is an absorbing story of a boy and his family oppressed by circumstances but, rewardingly, finding a way to rise above them. Extensive notes explore the history of conscientious objectors and the relative on whom the story is based.”  DS

“Helen Frost has a way of carving out interesting characters and shaping deep, rich stories, using the cleverest of a poet’s tools. Her novels, “Salt” and “Keesha’s House,” have always been two of my favorite novels in verse. Her latest book, “All He Knew,” is another showcase of her master skills as a poet, historian and storyteller…”

ALL HE KNEW is included on the National Council of Teachers of English list of Notable Verse Novels for 2021.

ALL HE KNEW is the winner of the 2021 Children’s Fiction Award, given by the Society of Midland Authors for the best book written by Midwest authors and published in 2020.