Twenty-six students, their teacher, and the school custodian create the story of this fictional 5th grade classroom.

Room 214 is named after Valentine’s day—this is a room where children thrive in an atmosphere of love. Each character’s voice is heard in the first half of the book, in poems using an array of traditional forms. The poems in the second half “spin off” of those in the first half, each one taking a line from the character’s first poem and using it as the basis of an acrostic poem in the second. The characters interact throughout one school year, creating a classroom community.

A final “Notes on Form” section encourages readers to go back for a second look, to see how the poems are constructed, and maybe try writing some poems of their own. 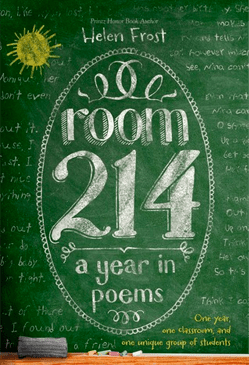 If you want to try writing poems in the forms in Room 214: A year in Poems, here are a few worksheets that may help.

“Appropriate, original imagery and understated, natural voices make these poems sensitive and insightful…The notes on how the form in each poem works are of particular value to teachers eager to guide students in their own poetry writing.” —Starred, Kirkus Reviews

“Poignantly conveyed…Readers may be surprised at the complexity of the rules governing the writing, so naturally does the author seem to capture the poetic essence of the children’s voices – she makes it look like so much fun that readers may want to try some of the forms themselves.” —Starred, Publishers Weekly

“Frost presents realistic problems in young people’s lives in a gentle, almost tender fashion. Her poems truly capture the essence and pathos of a classroom full of unique young people. Many readers will find someone that they know here.” —VOYA

Milissa’s bookshelf includes ideas and resources for using the book in a classroom.

If you want to try writing poems in the forms in Room 214: A year in Poems, here are a few worksheets that may help.