A story of two boys, one from the Myaamia tribe and one the child of an American trader, whose friendship is tested during the War of 1812.

“Helen Frost dives below the simple narrative of natives versus settlers to give us a refreshing look at the human side of events in the War of 1812. As the larger conflict trickles down, it reaches the lives of Anikwa and James, who must learn how to trust and respect each other during a time they don’t fully understand and in circumstances they can’t control.” —Daryl Baldwin, Director, Myaamia Center at Miami University

“The War of 1812 is a difficult conflict to simplify or condense down to a few key themes, and while SALT is a work of fiction, it quite successfully demonstrates this complexity along with providing the reader a sense of understanding and feeling for all its characters. … We heartedly recommend this book to Myaamia families.” —George Ironstrack, historian, Asst. Director, Myaamia Center (From the newspaper of the Miami Tribe of Oklahoma)

For a larger perspective, here is a map showing the loss of Native American land across the United States, over a period of about 100 years.

A longer description of the story (spoilers)

From the / Cooperative Children’s book Center in Madison, Wisconsin: “If we / sit down to eat with James / and his family, will he and I be able to play / a song together on our whistles? / That’s what he hopes for, / the question I see in his eyes: / Are you still my friend?” On the brink of the War of 1812, James is the child of white settlers who run the trading post outside Fort Wayne in Indian Territory and Anikwa is a boy living in the nearby Miami Nation village. The two communicate through gestures and a handful of words they’ve taught one another whenever they meet in the woods or at the trading post. James’s parents, especially his mother, view the people in the Miami village as friends. But the Miami are being encouraged by the British to take sides against the Americans in the pending war. Most people within the fort are now suspicious of their Miami neighbors. After Anikwa’s village is burned, the villagers must flee, heading west without winter stores in hopes of finding refuge with neighboring tribes. The trading post is also ravaged by fire. Poems in the two boys’ alternating voices chronicle how their tentative friendship is challenged by the rising tensions and fear that lead to assumptions and misunderstandings. Author Helen Frost also illuminates the complicated, untenable position in which Native tribes found themselves as American expansion continued west. The introduction to this artful and carefully researched novel provides historical context for the story, and brief notes tell more about the poetic forms she uses and this time and place in history. © Cooperative Children’s Book Center 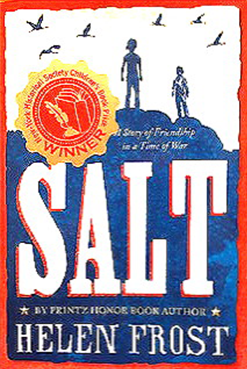 From the Online Myaamia Dictionary:

Neewe for visiting my website. (On this page, you can also hear how to say “Neewe, Niihka” or “Thank-you, friend.”)

You can hear pronunciations of other Miami (Myaamia) words by typing them into the search box on the Online Myaamia Dictionary. 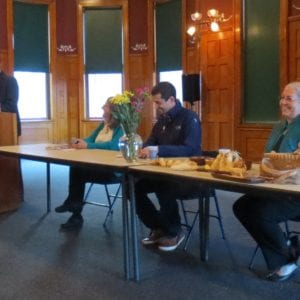 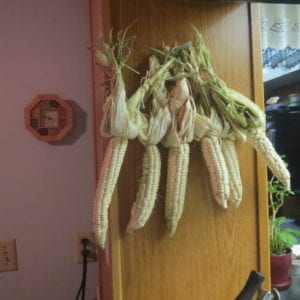 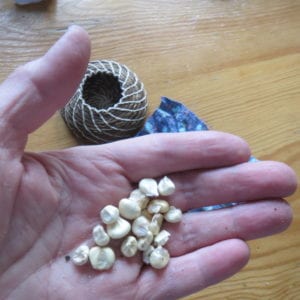 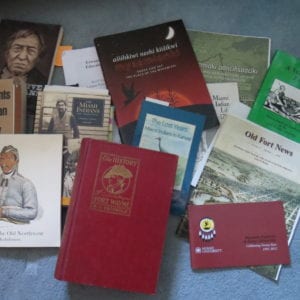 A few of the books consulted in research for SALT 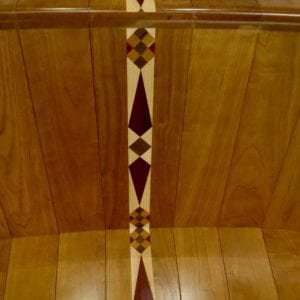 Patterns of diamonds and triangles are used in many Myaamia designs 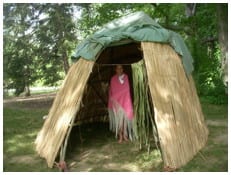 Gretchen Spenn inside the wiikiaami made by Myaamia children and adults at a summer language and culture program in Kekionga/Fort Wayne. in 2011 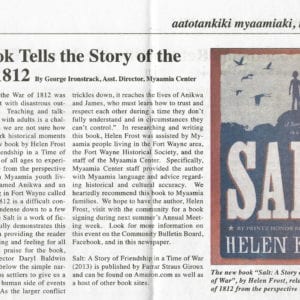 Review in the Miami Tribe of Oklahoma newspaper 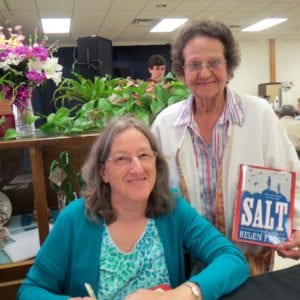 “Readers…will come away with a heightened sympathy for non-combatants caught up in the course of violent change.” — Wall Street Journal, July 20-21, 2013

“… Frost deftly tells the tale through each boy’s voice, employing distinct verse patterns to distinguish them yet imbuing both characters with the same degree of openness and introspection needed to tackle the hard issues of ethnocentrism and unbridled violence. Sensitive and smart: a poetic vista for historical insight as well as cultural awareness. (Verse novel. 10-14) STARRED” —Kirkus, June 1, 2013

“… Frost… has written, with artful economy, another affecting novel in verse…While acknowledging the uncertainties, misunderstandings, and occasional animosities of war, Frost also celebrates the relationship of both the Miami people and the Americans with the land and with each other. Explanatory notes and a glossary of Miami words are appended to this lovely evocation of a frontier America and the timelessness of friendship.” STARRED  —Michael Cart, Booklist

“Poignant and beautifully fashioned, this is a story that resonates far beyond the events it recounts.” —Joanne Rudge Long, Horn Book, July/August, 2013

“… The verse is succinct, yet beautiful, and the story is rich in historical and natural details. Fans of frontier and survival stories will find much to love within these pages.” —Jill Heritage Maza, Montclair Kimberley Academy, Montclair, NJ, School Library Journal

“…Lyrical poems about salt, a traded commodity necessary to both cultures, are interspersed: “Tears come from earth and sky,/ from words moving through us./ We taste them as they fall,/ leaving salt streaks on our faces.” Author notes and a glossary of Miami words conclude a very personal account of history that offers much for discussion.” — Publishers Weekly

“SALT is a remarkable novel … an important novel for students to read and consider as they are learning about the War of 1812 in their social studies classes. The perspective of the boys helps bring personal meaning to a period of history that can be hard for students to grasp.”—Charla Hollingsworth, VOYA

From the Online Myaamia Dictionary:

Neewe for visiting my website. (On this page, you can also hear how to say “Neewe, Niihka” or “Thank-you, friend.”)

You can hear pronunciations of other Miami (Myaamia) words by typing them into the search box on the Online Myaamia Dictionary.